We’ve noticed that we are not the only ones focussing on the engineering industry currently. The Royal Mail are commemorating 50 years of British engineering with its latest commemorative stamp set, released in May. These special stamps honour half a century of groundbreaking, life-saving, world-changing engineering excellence. 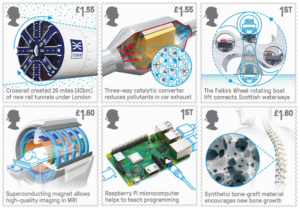 The Harrier Jump Jet, which is also celebrating 50 years since it entered RAF service, is itself also featured in a miniature sheet of four stamps. This triumph of British aviation engineering was the first operational jet fighter in the world to use revolutionary vertical short take-off and landing technology, powered by Rolls-Royce’s Pegasus engine.

Philip Parker of Royal Mail commented: “British innovation in engineering is world-renowned. This stamp issue proudly celebrates the projects and inventions which showcase this, as well as demonstrating the extraordinary range of disciplines that British engineers excel in.”

The NonExec specialises in mergers & acquisitions (M&A) within manufacturing, engineering, and technology industries. If this is your area why not come and meet us at the forthcoming Technology and Innovation event we are running with Dorset Chamber of Industry on 28 JUN 2019, bookings open now.